About the AD conversion of the ESP32C3
The datasheet says nominally 2500mV full scale AD conversion, but there is a large variation from chip to chip, actually ±10%. My chip was 2700mV full scale.
Fortunately, the calibrated correction value for each chip is written in the fuse area, and by using the function alalogReadMilliVolts(), I can read the corrected voltage value without doing anything special.
The result of AD conversion and the voltage measured by the multimeter agree well with each other with an error of about 5 mV, which is not a problem in practical use.
In addition, during communication in particular, spike-like errors occurred, which had to be averaged out 16 times to remove them. 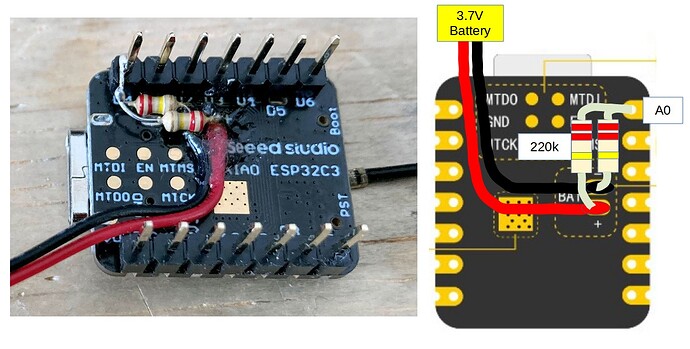 I wonder if there’s any way to use the matrix mapping in the ESP to actually attach a port/pin to the battery? It’s not so hard to add a voltage divider, but it seems almost impossible to understand why this board has a charger but can’t read the battery charge!

As far as the schematic shows, the battery terminal is not connected to any port.

Hence the Voltage divider youtube video :-), either intentional?(without explanation) or a HUGE, GIGANTIC fail by whomever at Seeed Engineering.
SMH ;-p