I finally received my reTerminal after almost a year on back order.

The unit powers up, first with a green Power light, followed by a green SYS light, both remaining on, but no display to the screen.

I have not attempted to connect an external display via HDMI.

Help would be appreciated.

Same here but only after the first update. Unboxed it, powered on, all worked took me through initial set up, asked to download latest software, it did, rebooted and now I get a blank screen…

Subsequent attempts to boot have both PWR and SYS light illuminated, and the heat sink will again get very hot, so something is happening. No lights on the ETH port, even when connected to a network.

I’ve done some digging around to see if it might be the rpi or the host board that might be the issue. Even after imaging the eMMC (so we kind of know the CM4 still works), I still can’t get any output from the screen. I’ve attempted installing RISC OS and RaspberryPi OS (latest).

For whatever reason, I’m limited to having two URLs in my post!

To note the official Raspberry Pi documentation notes an awareness of this bug:

“Note There is a bug in the BCM2835 (CM1) bootloader which returns a slightly incorrect USB packet to the host. Most USB hosts seem to ignore this benign bug and work fine; we do, however, see some USB ports that don’t work due to this bug. We don’t quite understand why some ports fail, as it doesn’t seem to be correlated with whether they are USB2 or USB3 (we have seen both types working), but it’s likely to be specific to the host controller and driver. This bug has been fixed in BCM2837.”

If you see the above, you can now select the reTerminal as USB mass storage in the rpi-imager!

If, however, you see the following:

It is highly likely you have connected the reTerminal to a USB3 port - find a USB2 port on your machine and try again.

I’m not sure what else to try at this stage, since I don’t have a Compute Module 4 IO Board to test the CM4 against. I might try looking at getting the screen to work with another rpi.

It would be great if someone from seeedstudio could chip in on what might be happening.

So I got networking working, and reflashed the eMMC with SSH support.

After SSHing in, I could upgrade the OS but nothing available except via SSH - vcgencmd thinks there is no display, which is a big possibility as to why the LCD screen isn’t displaying anything…

I encountered the same or a similar issue. Powered up normally. Initial setup asked to upgrade software, the system including touch screen got stuck during the upgrade. After waiting for some hours I unplugged the device, plugged it back in and the screen stayed black. I was able to finish the upgrade via SSH, but this did not help.

I have now flashed the eMMC with Ubuntu Desktop 21.04, and also the current Raspberry Pi OS - in both cases the screen never goes online.

Is it possible that some module ha to be enable to make the screen work?

I have a workable solution that might help many of you:

@lcnittl, If you don’t use the Seeed Studio image, you need to build the reTerminal drivers:

Now, I couldn’t get this to work, but you might have better luck. Otherwise, just use the Seeed Studio version, which already has the drivers.

Lastly, many folks had issues after updating - if you can get yourselves into a good state where’s it’s working first, then move forward with getting the package updates working.

Hi @glaeken - thanks for your reply.

Indeed, I just found that I had to do that https://wiki.seeedstudio.com/reTerminal/#install-reterminal-drivers-after-flashing-new-raspberry-pi-os-ubuntu-os-or-other-os .

I’ll let you know if it worked.

Driver install fails for me too on Ubuntu:

I think I found a solution - make sure that reTerminal has an internet connection and that either SSH is setup or you have the means to connect to the UART console.

After upgrading and rebooting, the screen will stay blank, yet the OS should be up. Now connect to the console via SSH or UART and reinstall the drivers as outlined here.

The screen should work again after a subsequent reboot. (although I have to say it seems I have a flickering ribbon on the screen now - not sure where it comes from).

I assume that the firmware or kernel upgrade somehow messes with the configuration done by the driver install.

Hope this helps - and hope that this issue gets resolved in the future.

Yes, that works. So the first automatic upgrade, over which the user has no control, will clobber the drivers. Do I detect traces of egg in Seed Studios face? Anyway, thank you Icnittl.

[quote=“glaeken, post:4, topic:259833”]
Subsequent attempts to boot have both PWR and SYS light illuminated, and the heat sink will again get very hot, so something is happening. No lights on the ETH port, even when connected to a network.

I’ve done some digging around to see if it might be the rpi or the host board that might be the issue. Even after imaging the eMMC (so we kind of know the CM4 still works), I still can’t get any output from the screen. I’ve attempted installing RISC OS and RaspberryPi OS (latest).

Same issue here… New reTerminal successfully boots out of the box, goes through an initial setup process that includes: localization, setting up a new password, setting up the network (WiFi), and guides you to upgrade.

I was able to ssh in, needed to install git…

cd to the directory… 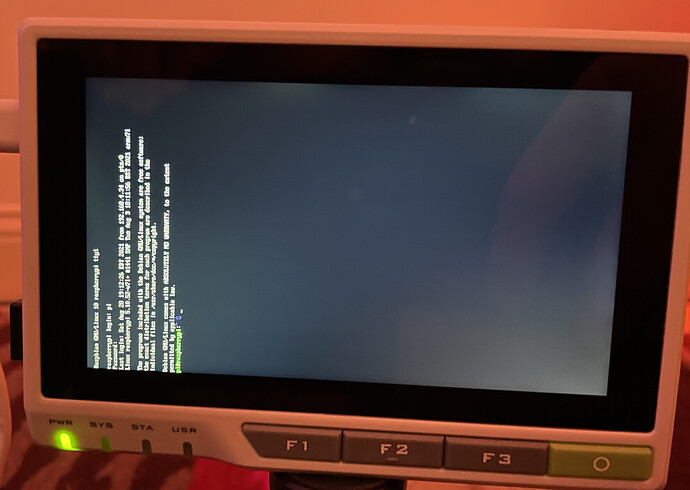 Suggestions on how to correct the rotation, and re-allow auto login on the console?

Everyone good luck fixing this issue. I had hoped to use these on a product we’re rolling out. I ordered one and it is a complete disappointment. Shifting my initial 200 units to something that works from a company that cares.

Anyone who wants my brand new screen doesn’t work shitTerminal… $50 and its yours, message me.

Had same issue, and recommend fix worked. Not sure how something like this got pass QA testing?

Are you shipping products using the default distribution from the manufactures? Please don’t do this, this is how botnets are created. And don’t use the RPi standard image either. The reTerminal is about the hardware. You’re expected to re-spin / create your own distribution. Yes it’s a shame that this has happened, mine had the same issue and I just received it. So not been fixed in the last month. But I always planned to be using my own distribution that has been tailored for the customers requirements.

We apologize for any inconvenience caused after updating the reTerminal for the very first time. There was a major problem of the LCD not working after doing an update through the initial configuration window. However, if you have checked the wiki carefully, I have mentioned under Step 9 inside Quick Start with reTerminal that you need to skip this step and update the reTerminal through command line separately. Otherwise, if you directly update from this configuration screen and reboot, all the drivers will not load again properly, causing the LCD to not work.

However, I understand that most people, when they buy the reTerminal, they just power on, and will go through the initial configuration screen just as they would with a Raspberry Pi without checking any manual.

So now we have fixed this bug from the Raspberry Pi OS factory image and you can find the latest images here. Please flash the OS using this wiki, and then you can update the reTerminal as usual.

Also, we will ship our latest reTerminals with this image already pre-installed. In that way, future customers will not face this issue.

We hope you understand this matter and hope to see you all doing great projects with reTerminal!

I welcome you all to join our Discord as well and ask any reTerminal related question in the cm4-related product channel. If you have questions for other Seeed products, you can choose a different channel.

Check out the Seeed Discord Community community on Discord - hang out with 389 other members and enjoy free voice and text chat.