Is my XIAO Expansion board defective? or repairable? 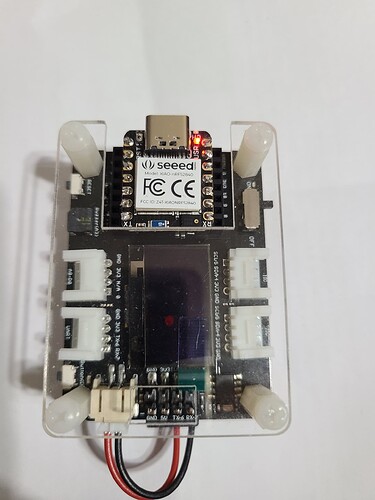 Additional test run today (14 February 2022. Just the board alone (no XIAO Microcontroller at all), when a LiPo battery was attached the area under where the XIAO BLE or RP2040 would go immediately becomes very hot!

FYI, I’m seeing the same not working/heating issue with 2 of my expansion boards when attached via usb connector.

Seems the 3.3v line is being pulled down to .82v when the Xiao BLE is attached to the expansion board. It’s 3.2v when not. It was working just fine, then stopped working. It could be the pogo pins not making good/intermittent connection while power is applied is toasting the power regulator or some such.

A related post about two 3.3v regulators tied together. With my next expansion board, guess I’ll try what is suggested in the post and remove the Xiao, 3.3v pin from mating with the expansion board.

Thank you for your answer. Please tell me why you need to connect the two outputs. The following is just my view. Even though it is 3.3V output, there is a voltage difference between the outputs of the two regulators. A large current may flow through the regulator depending on the voltage difference and the magnitude of the output impedance. Of course, I think the regulator is designed to limit the current, but I don’t think it is supposed to be used to connect the outputs. Isn’t there a very…

Per this post I cut a trace on the expansion board, I can now use the expansion board with JLink SWD (via Pogo pins). I did have to connect the Jlink 3.3v input directly to the Xiao 3.3 rather than along side the other SWD connections. I expect the other board functionality is lost though.

Only one place needs to be cut. If you don’t want to cut it, you can also remove the XIAO pin header. [XEB]