I’ve had 2 WIO terms fail on me - both in the same way. The first was out of the box - grey screen. I could program it and sent a simple turn the screen on/off with the face button. Screen went on/off but when on was only grey. The second failed with the same mode after running a color change routine (red - green - blue with 10 second delay between).

Anybody else seeing this problem?

An Update on this display issue. I loaded the WIO Terminal version of Circuit Python onto all three of these and the display works under CPy.

Now all I have to do is figure out the nuances between regular python and CPy.

This is definitely a software/library/firmware issue. I can’t believe I’m the only one seeing this…

Hello, can you copy the code that you showed to be problematic? I take the time to check for you.

This is a correct example of a realistic red screen

I need an example of your problem 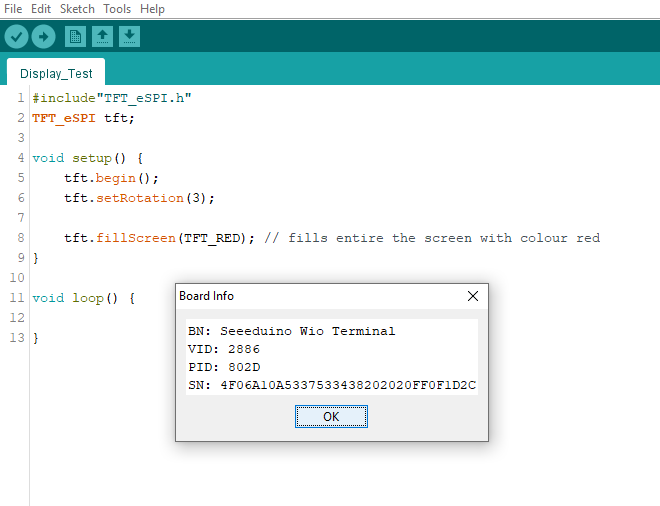 Upload that sketch and nothing happens.

Forgive me asking this, but, just so it can be ruled out…

===
Post your code as text that I can copy/paste, and I’ll try it in my Wio Terminal, if you like.

Display works with Circuit Python and the LovyanGFX library

Here is the output of the programmer:

Happy to tell you that the code works fine in my Wio Terminal… your code seems fine. Sorry about your specific Wio Terminal. I hope I don’t “do something” to my Terminal*, to change what it is doing today!

Yes, I have tried this code, and it runs smoothly and there is no problem. At present, it may be that there is a problem with your Wio Terminal. You can contact our technical support email and send this forum post and details to techsupport@seeed.cc, they will help you exchange goods or solve problems.

First, thank you for your input.

Just to be clear. I have been programming arduinos since 2014, and use them regularly in products I sell. I have 3 projects running on WIO terminals, 2 LED controllers and one environmental sensor array. I don’t have ONE board with this problem I now have three, all showing the same issue - no display with TFT_eSPI. In all cases when originally plugged in the game appeared and when I pressed a button - disappeared and the screen went dark. The only TFT_eSPI function that gets any response is the set brightness function which gives either a black screen at LOW or a grey screen at HIGH.

It is possible I did something that corrupted the devices source code on the first 2, but the third was not connected to a computer when the game disappeared, so I’m thinking low probability on that. It is also possible that I have the only 3 devices SEEED has ever sold with this problem, but the statistical probability of that is indistinguishable from ZERO.

They are working fine with the LovyanGFX library, as well as with CircuitPY, so there is something going on here about compatibility that is not obviously hardware related.

I’ll buy another one and test it out, but if I were running SEEED, I’d want these boards back in my shop to find out what is going on…

Thanks again for all your help.

I’m having this same issue – none of the examples change the TFT on my Wio Terminal.

I have found that if I do

Then I can at least get the LCD to turn on. (Without that, it is always completely off.) However, the screen only displays what was last written to it.

If I add something like a Serial.println() to the setup, I can see that in the serial console. But no changes to the screen ever show up.

If I load up the CircuitPython bootloader, though, that works fine, as the original poster had mentioned.

Here is a full example:

Here is a video of it running with the serial monitor in the background: Dropbox - IMG_4540.MOV - Simplify your life

(It has some stuff from CircuitPython still on the screen, which never goes away.)

I ran your program and tried it, and it is possible to turn on and off the screen to display green. In this case, I suggest you to burn the wio terminal initialization program and try again.
https://wiki.seeedstudio.com/Wio-Terminal-Firmware/

However, I was finally able to fix it by deleting all of the downloaded libraries and reloading just the ones I needed to compile my code.

I think there was a conflict between some of the libraries or installed versions that was causing the issue.