For those that wish to upgrade their probes to more substantial items, I have produced a guide. It’s a basic task for some I realise, but it might help out someone.

Mind if we add your blog link to our product page? Great review indeed! : )

Current probe is for matching the portability of DSO nano, in aspect of both looking and shape. Thanks for the feedback, we will check out something stronger.

One thing too late to post:
seeedstudio.com/depot/trs35m … p-561.html
Hope this eases the conversion.

One thing too late to post:
seeedstudio.com/depot/trs35m … p-561.html
Hope this eases the conversion.

Arrrgh… lol I will update my review and my conversion article to include a mention of this. For the price a purchaser would be foolish not to buy these.

dont beat yourself up. You took the initiative and did this yourself without even knowing if it would work. A true Maker. Kudos for that…

dont beat yourself up. You took the initiative and did this yourself without even knowing if it would work. A true Maker. Kudos for that…

Oh I wont, my probes are pretty good and the cost was not much different to using the adaptor. Of course the adaptor will save some the effort, but its not that hard a job anyhows.

Have you gotten your probes to work on all scales yet?

Have you gotten your probes to work on all scales yet?

No not yet. I will have to sit down though and do some more tests (on freezing’s suggestion) on some higher voltage square waves. Reckon this will take a couple of hours. I think this may be a firmware solution, and even if the api is realeased, I am not skilled enough to resolve this.

just wondering… you DID test your stock probes out on all those scales, right?

just wondering… you DID test your stock probes out on all those scales, right?

That is a very good question… Just checked it.

Image above is X1 probe but using X10 setting on Nano

Both stock and modified probe at 1X setting show a square wave (though with a spike on the rising edge) Change the modded probe to 10X and the wave disapears back to the first image in this thread.

I have had a couple of whiskeys, (and the screen resolution is working against me here) but its almost as if the signal is being divided rather than multiplied in this scale.

ie on a X10 probe the signal needs to be multiplied to take account of the increased attenuation of the probe but is not.

so how were you getting snapshots from the screen? using a camera?

so how were you getting snapshots from the screen? using a camera?

No I am using the SD card then converting the data to bitmap. There is software linked to a couple of threads down…

I bought two DSO nanos, one for me and one for my friend. Both two DSO nano with x1 probe shows following image when I connect probe to signal output of DSO nano: 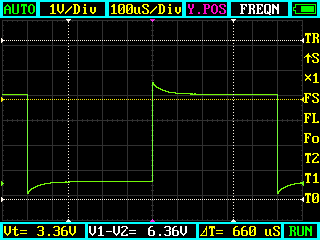 DSO nano showed following image when I change to x10 mode with the same probe and signal: 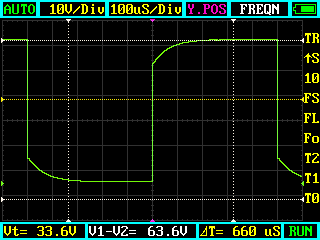 The picture below is the wave observed when I connect x1 probe to 1V p-p output of another oscilloscope. 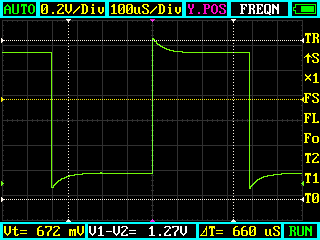 Are these image expected ones? Or something is wrong?

Are these image expected ones? Or something is wrong?

Look OK to me. Did do try calibrating the probes when in X10 mode? There should be a screw on the probe shaft or there abouts that adjusts the capacitance on the tip of the probe. Idea is you adjust it till you have as close to a square wave as possible.

On a X1 probe, the calibration has no effect. So you do see that distortion of the waveform.

the waveform in the first pic is all right , but you “change to x10 mode with the same probe” , so the 2nd pic is not correct

Thank you, justblair and FreeZinG. I just wanted to make sure that they are expected wave form for x1 mode.