I need help. The DSO doesn’t start for moments. It keeps emitting the beep sound and the only thing that is shown in the screen is the hardware version, the serial number and the system version and it stays in that screen. The only thing that I can do is to change the system version but whatever version I use it keeps freezed there.
I leave the DSO for the night without the battery and the next day it start working again for a while. Later, after I leave it for two hours to do another thing, when I turned on again the same problem appeared again.
I really don’t know what is going on :S
I attach an image of the screen

I attached the screen where it keep frezzed and emitting the beep.

If someone could help me, I’ll really appreciate that. 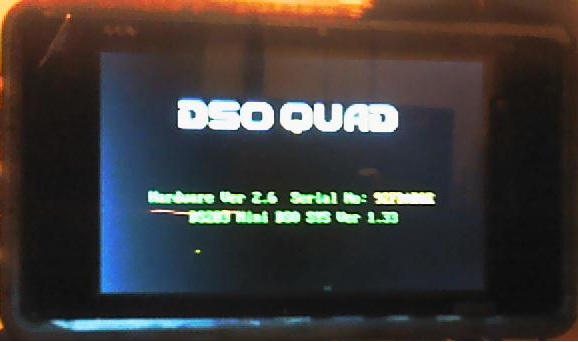 I discovered that the “O” button of my quad wasn’t working ok, sometimes it stayed pressed and when that happen and I try to turn on the device it stays freezed in the main screen. actually if you try to turn on the device while pressing any button except for the “>||” it is going to stay freezed in that me, or at least that is what is happening to me.

That makes sense, because holding down button 2, 3, or 4 at power-up is how you would launch Application 2, 3, or 4 if you had extra apps installed (normally you just have the standard Application 1).