I have built an application using an Seeeduino XIAO that operates in the following manner:

The connection diagram is presented in the picture: 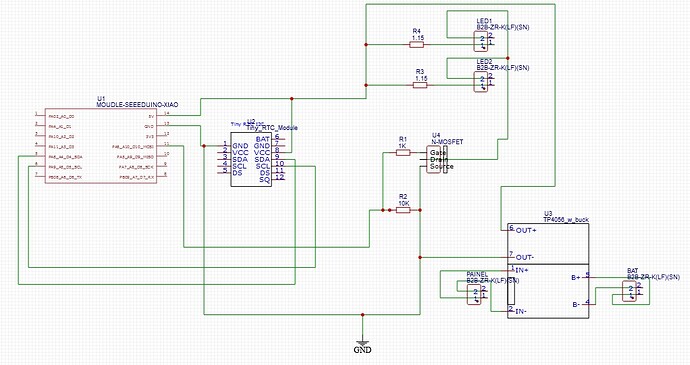 The first prototype seemed to work fine. However, when I scaled this prototype to 30 units, some strange behaviours started to appear, namely:

While doing some research, I’ve come to think that the connection of the output of the TP4056 to the Seeeduino supply pins is incorrect. A colleague suggested that I should connect the TP4056 output to the 3.3V on the Seeeduino (instead of the 5V) and use a resistor and a Zener diode as a voltage regulator.

Does anyone with experience in such matters know if the behaviours I mentioned are caused by the way the supply is connected, or if the cause might be something else?

Have a look at the Development board schematic. it’s linked in the WIKI,
You will find an answer there and I personally wouldn’t use a 5 Volt ANYTHING on a direct connected SAMD based mcu. Even optoIsolators too, and FYI Dont’ ever connect them reverse polarity, They will still work if you disconnect fast enough. But bye-Bye to battery charging , it falls on the sword, to save the Mother chip.

Then the Wacky behavior begins, mostly works like 80% turns on and off on it’s own. It’s a display model… Don’t ask how I know. NEXT UNIT!
HTH
YMMV
GL :-p Most of my are issue are between the keyboard and the floor…& RTFM