Hello, I bought the reterminal and tried to install the raspberry pi noir camera on the 15-pin CSI camera port, but I couldn’t. After installing libcamera, without having the “Glamor” option in the “Advanced Options” of “RaspiConfig”, I did the “sudo reboot” through the terminal and after that the reterminal never started again. I’ve already tried to boot the raspberry pi os (recommended) and the 64-bit Ubuntu os, but it doesn’t start any operating system, it just turns on the green led.

Hello, it may be that you have damaged the integrity of the system during the installation resulting in system corruption, have you tried reinstalling the system?

Yes, I already tried installing raspberry pi 32bit (recommended) and 64bit ubuntu 21.10. I followed all the instructions from the Seed wiki but it doesn’t start. If the csi camera is damaged, will it cause damage to the reterminal too?

No cases have been received where a camera has caused damage to the reterminal. Have you tried connecting to the reterminal on top of the LAN? Through ssh? Determine if the display is corrupt or a hardware issue.

Yes, I was able to access via ssh and then I used raspi-config to configure and access via vnc, but it gives the message “cannot currently show the desktop”.

I managed to solve the problem just now, through this forum tutorial: 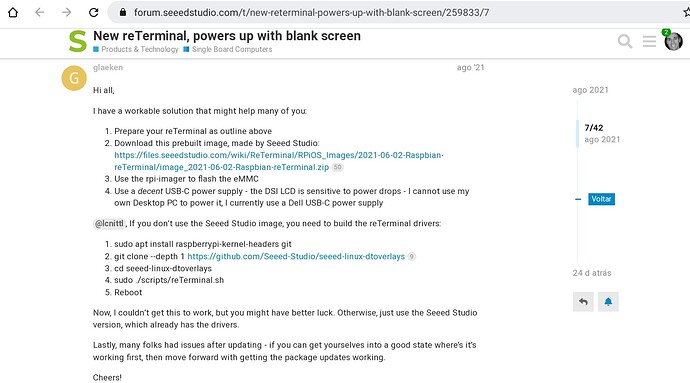