I received my Arduno Duemilenove a few months ago and have used it from time to time trying to learn C or it’s variant. A few weeks ago I received the Rainbowduino and finally figured out how it works for the most part with I2C controlling it from the Arduino. However, I saw recently the Rainbow Cube Kit and thought it would be very nice to use with the Rainbowduino.

I received my Rainbow Cube kit a couple of days ago and it was very nicely packed in a plastic storage box (bonus gift). I built it carefully with the instructions in a couple of hours. It was fairly easy but delicate to work with the small pcb sections. Take your time and most users will be fine. When finished if you have the default Rainbowduino_v3_0h_Firmware loaded into your rainbowduino, you will see the very colorful display as shown in the Rainbow Cube kit picture. The size of the Rainbow Cube kit was much larger than I had expected so I was very happy about that. The LEDs used are pretty good sized and if you look directly down into the top of the LEDs they will be more bright. In a darker room or more shaded room they look great at most any angle.

Next I wanted to see something different and I highly recommend the Plasma program (found as a download on the Rainbowduino site) as it cycles through all the colors very beautifully and makes a great demonstration. I will the manual would have at least mentioned something about the software setup even though nothing really had to have been done.

The Rainbow Cube kit can be thought of as 4 sections (or quarters) of what you would see if using the standard RGB LED Matrix with your Rainbowduino. I have an attached drawing I made in Visio (saved as a JPG) to show this. I have also attached some sample code to demonstrate the JPG. 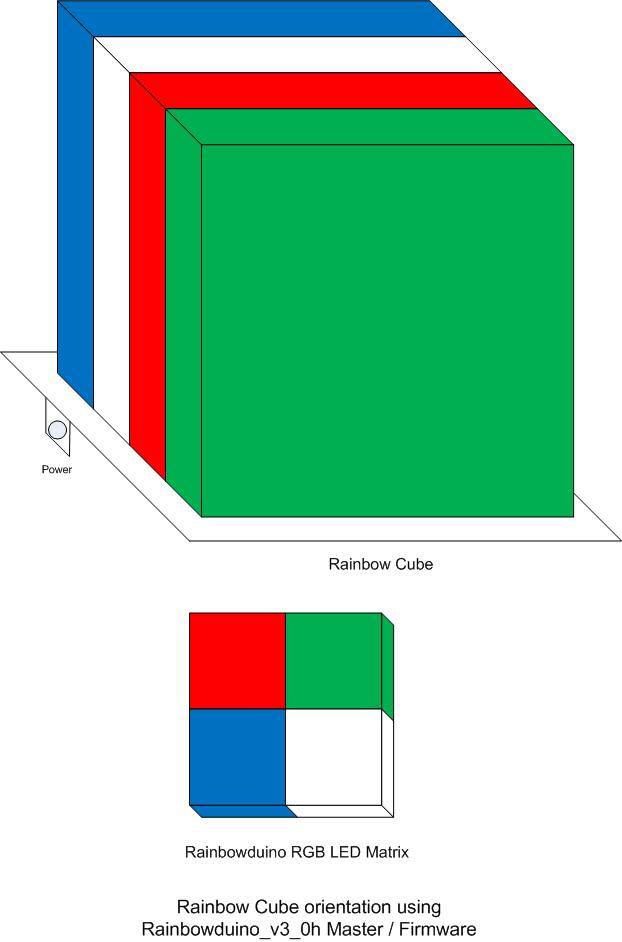 Thanks for the illustration! I believe many users are scared off by the complexity, our shame for never had made the steps easier…