I have used the Mic Array v2.0 for a while now. One thing I’ve noticed is that the first channel, i.e. the beamformed channel for ASR, always contains some hight pitch noise. See the attached picture of the spectrogram.

I have tried tuning the parameters but couldn’t get rid of it. Seems it has picked up some interferences.

For the reference, I am using Raspberry Pi 3 for recording. AGC and Noise Suppression are both turned on. Below is a link to the audio file

Any assistance is appreciated. 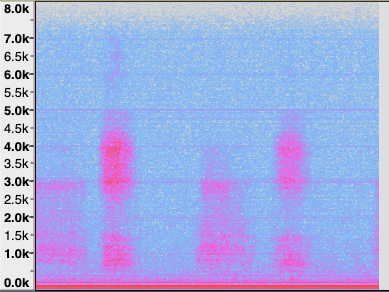 Further to my problem I’ve done some investigation and believe the high pitch noise comes from the USB. As you can see from the spectrogram the noise has a perfect fundamental frequency at 1kHz and harmonics at multiples of 1kHz. I read some articles with the following explanation:

To minimize this, one thing to do is to ensure the current flow between the USB controller and the USB transceiver of the PCM2906B is minimized in the signal and GND path between the analog source and the analog input of the PCM2906B. Second, connect all the GND pins to each other under the PCM2906B. If the probelm persists, common mode choke coils on the data lines and power lines may help to reduce common mode noise and reduce clock disturbance, improving performance.