LoRa E5 does NOT contain a Semtech SX1262

Why does seeed advertise a Semtech SX1262 as part of the E5 module when it does not contain one? Apart from being very confusing, this is a lie, and is certainly not building trust. I am considering legal action.

I Agree, I think it is confusing too, makes no sense!

I think the confusion starts when they are marketed as a STACK, while they are not, they are embedded at the silicon level and there is no way for us to go bare metal on the software. The radio while may be still good, will never have a transparent development potential.

yep it’s the compromise of such architecture, you can’t have all benefits in same time

hi elevator,
I have found the LoRa E5 module’s datasheet and it is stated here that it is integrated inside the chip,So I don’t quite understand what lies you are talking about, can you explain? 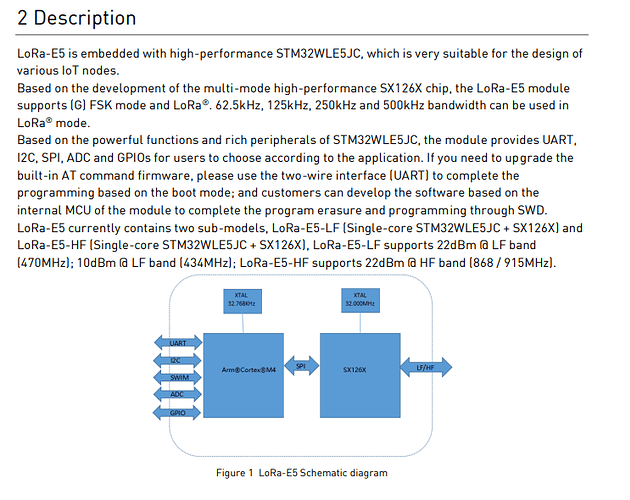 Hi chunchun,
it is all about vague and ambiguous choice of words. In your quote from the E5 datasheet:
… LoRa-E5-LF (Single-core STM32WLE5JC + SX126X) means in the module there is an STM32WLE5JC, and additionally an SX126X. This is misleading since we know that the STM32WLE5JC already contains an SX126x IP, so the “+SX126x” is false. A better statement would be (Single-core Cortex M4 + SX126x)
The distinction has important implications for firmware development. If the SX126x is in IP form as part of the STM32WLE5JC, to write/modify the firmware I rely exclusively on the STM32WLE5JC documentation. If instead there is an additional SX126x chip in the module, I must follow the Semtech documentation.

Same problem further up:
Based on the development of the multi-mode high-performance SX126X chip, the LoRa-E5 module supports…
By “chip” I understand a physical piece of silicon, which may be documented in any Semtech data sheets. Note, strictly speaking there is no such thing as a “SX126x chip”; this in itself is wrong.

I know, writing datasheets is not easy. I recommend more quality control.
BTW another vague and potentially misleading piece:
If you need to upgrade the built-in AT command
firmware, please use the two-wire interface (UART) to complete the programming based on the boot mode; and
customers can develop the software based on the internal MCU of the module to complete the program erasure
and programming through SWD.

Can you explain the above in clear, practical steps? Thank you!

Thank you very much for your serious answer. I will confirm this matter later. I will communicate with you once I have the latest information.

I’m really sorry for bringing you bad experience. After inquiry, I find that the problem is caused by the failure of synchronous update of the datasheet. Now the product description page and the datasheet are described in The December 2019 version, while the latest datasheet is the January 2021 version. Next, I will arrange relevant personnel to update all the places related to these issues. Thanks again for your feedback,

upgrade the built-in AT command:

As for this problem, I will ask the technical support engineer to explain the detailed operation and steps for you.@MengDu

Hi, I’m more than happy to help you, can you tell me where this passage comes from?
“If you need to upgrade the built-in AT command
firmware, please use the two-wire interface (UART) to complete the programming based on the boot mode; and
customers can develop the software based on the internal MCU of the module to complete the program erasure
and programming through SWD.”

Thank you citric. The passage is from the E5 datasheet, quoted by chunchun upthread.
-e

I guess what he meant was that just like other ST chips, firmware programming is done through SWD, and downloading programs are done using serial ports

Can they please explain it to the forum so that others also interested in bare metal designs can benefit? Cheers!