Hi,
I am trying to make an Arduino Nano 33 IoT work with the Grove Shield for Arduino Nano.
I tried examples from the official libraries of three different Grove modules, but none of them worked.

The Grove modules that I tried are:

According to the Grove wiki entries these modules should be compatible with 3.3V boards.

The example code compiled without problems and. I made sure that the right board is selected in Arduino and general uploading works (via blink example). Also, I tried various grove ports and changed the pin in the code accordingly.
The temperature sensor always reported an error, the LED did not light up, and the rotary sensor reported random values, which did not seem to react on me turning the rotary.

Question 2:
What board + shield would you recommend if WiFi is a requirement? Raspberry Pi is not an option (because of size).

Question 3:
Do you think all my Grove modules are damaged? I never used them before.

I hope somebody can help. Thanks in advance!

The good news is that you can cut off the wire and re-solder the VCC bus of the shield to the 3.3V pin of the Nano 33 board, then it should work. Please follow the steps below. 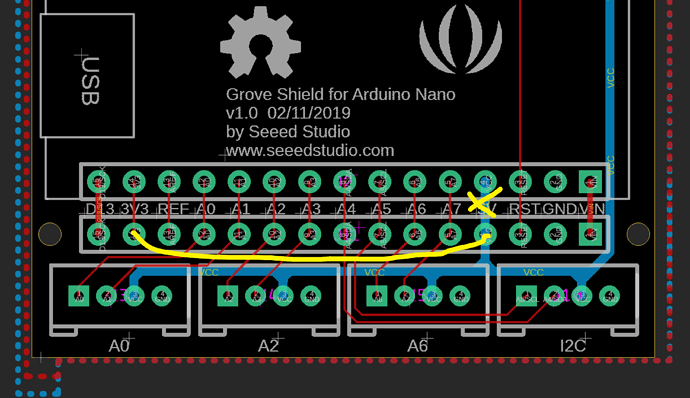 And we apology for the inconvenience. We designed this product at a time when the Arduino Nano 33 series was not yet released, so we did not do a level-compatible design. And thank you for posting to let us know about this problem, we’re considering making an upgrade version to support Arduino Nano 33 series.

We hope the solution works for you and thanks again.

Thanks for the detailed instructions. Just adding a a connection between the 3V3 and the 5V pin was enough for me to make it work. By default, the 5V pin is not connected on the Arduino Nano 33 series (only when closing a padded solder-bridge, as explained in the official docs), so cutting the connection was not necessary.