My DSO Quad arrived yesterday!
I have been playing with it for a few hours and I think I have a hang of it.

I had it shipped with DHL due to the usual postal services in South Africa taking forever! You wait six weeks…
It was shipped on the 7th and arrived in the country on the 11th. I could only pick it up yesterday since I was quite busy on Monday.

The box was smaller than I thought it would be. After eagerly ripping off the packaging I found the following inside:
1x DSO quad… duh!
2x Probes… Mueller probes according to packaging
1x 3.7 1200mah Lithium battery.
and tiny marking rings for the probes.

The battery was sealed in an anti-static bag.
It’s wires are quite long, so I had to squeeze them into the holding clips and bend them back to insert the battery. It fits loosely, but the back plate holds it in snugly. I almost crushed the wires when I put the back on, they peel out if you do not put them in properly.

Upon switching the unit on… I was confused. I had no idea how to work the menu or what everything’s relation to each other was. The lack of any documentation surprised me a bit, but I assume Seeedstudio is working on it.
I finally figured out that colours play an important role in the navigation.
The menus are broken up into three sections, top, bottom and right.
Navigation is done with the two rocker switches, it takes a while to get used to it tough.
I immediatly fetched a 555 project I was working on, since I know the PWM wave well and wanted to see how accurately it is reproduced on the Quad Vs. my Fluke… unfair comparison tough…
The result: 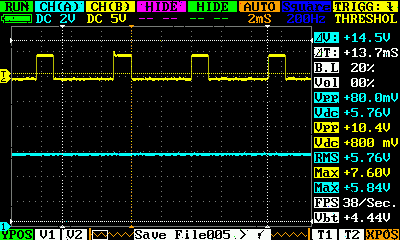 Note: This was captured directly on the device.
NB!!! It can only save a file if there already exists a file with the same name on the storage directory.
Ie. trying to save FILE001.BMP will not be possible if the directory is empty or only contains FILE000.BMP
This took me a while to figure out, saw a module posted here on the forum that solved the problem.

Last night while trying to figure out the menu I accidentally entered what seems to be a calibration menu. It happens when you are in the top menu and a channel is highlighted and you press the (square) stop button. I inadvertently started setting values and after a while tried to properly calibrate it with a DC power supply… not sure if it worked though. I have not had a chance to check it Vs. my Fluke.

I then started playing with the signal generator. It looks good, except the resolution on anything but the square wave… is loooow. The sinewave looks very blocky…
I looped the two probes, one in the wave-out and one in CH-A. Attached the Fluke as well, blockyness was evident on it as well.
One thing that I noticed while cycling through the frequencies was that 100Khz produced a very skew square wave. 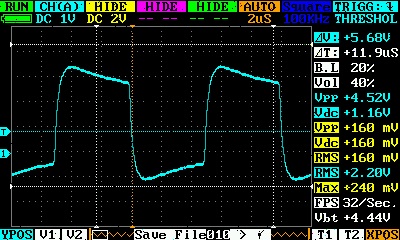 The Fluke, although much less, also had some skewness in it - so it might be the scope function…: 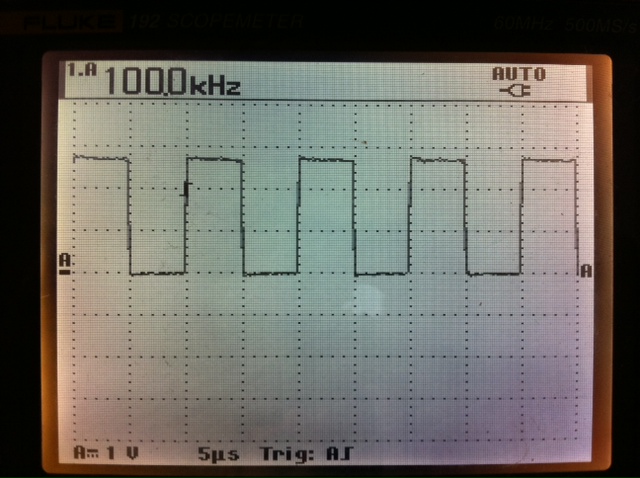 Something else that I noticed was that the square waves were not entirely square. Had a little droop on their corners.
Does the Quad have a trimmer to adjust this internally? My Fluke’s probe has one on the BNC connector to correct this.

Could someone maybe explain to me how the analogue channels (A&B I think) differ from the digital channels(C&D)?

Otherwise, I’m not sure how I’ll be using the .DAT export, I saw someone in another topic is developing software to interpret it.

Updating the logo file also does not work, but I assume you should do it when upgrading the firmware. I found a set on one of the other topics on the forum, but I assume the current version on my Quad is the most up-to-date version.
Will try adding a new logo soon.

Overall I’m very impressed with my Quad. It’s definitely worth the money!
A little documentation and roadmap for upgrades and feature implementation would be nice though.

Final note:
Since this is a BETA build, there are some hardware imperfections. Mine for example had some dust and a wooly(?) strand underneath the screen cover. Might disassemble it later to clean it. I assume Seeedstudio assembled the 300 units at record speed-mine had some fingerprints on it when I opened the box. lol

Hope everyone else gets theirs soon!

Thank you for sharing your first impresions . Please don’t forget and post as much as possible about it .

Overall I’m very impressed with my Quad. It’s definitely worth the money! A little documentation and roadmap for upgrades and feature implementation would be nice though.

Because of the absence of documentation, I created the following video using the engineering version. This video provides a good overview of the Quad menu system and may be helpful.

The metal part of the back cover is not correctly glued

Well i have had my quad now for about 10 hours. You can either call me simple to please or my expectations are set too low but i am impressed with the quad. The menus are not too hard to work out after a little playing and i did a firmware/logo upgrade without any issues, my battery was not wired up backward and charges as one would expect. I am going to play a bit more tomorrow as my mrs insists it is time for bed and i think i may be in more trouble than it is worth to take it with me

It was the feeling I had.
Thank you for the answer.

First, I have to say that I am overall impressed with the product.

It surely has some downs, one of them being the analog BW stated vs. actual, but for the given price I think we can live with it.

One needs to know that the probes that come with the unit are not compensated. After quick schematic review I figured out that C3A and C5A adjust compensation for channel A, and C4A and C6A for channel B. These trimmer caps are accessible under the battery, btw.

The pictures show the 31kHz signal before and after compensation adjustment. The edges are little round as the actual signal was having them slightly round (verified w/ my bench Tektronix).

For best results use polymer screwdriver to adjust. 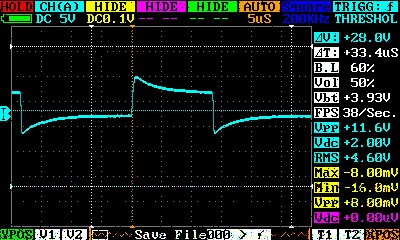 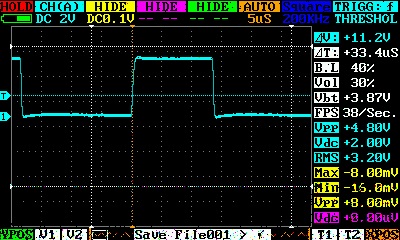 Maybe you could just hide it under the pillow and take a quick sneak glance at it on occasion.

My first impression is that the case and the screen doesn’t look as high quality as the first version of the DSO nano I got last year. IMO I think the white color plastic looks cheap.

There are quite a few visible dust particles between the LCD and the case. This is easy to clean once the case is removed.

The plastic window over the LCD (after removed the protected film) looks dull compared to the first version of the DSO nano. Finger prints are very visible on the window.

The bummer is that the battery wires arrived reversed. Plugging the battery in results in some burned smell, and the charging function seems dead or maybe very very slow. The unit still works with USB. Battery still works, but because of not being charged, the brightness of the screen is very low. If the charging current is 500mA, it should take about 3 hours to charge, but it doesn’t seem the case with my unit after having battery plugged in backwards. I have it plugged in almost all day, and the battery voltage is still 3.9v

It took a while to figure out what buttons are and how to use them. Still don’t know how to change the duty cycle of the square wave generator.

If the two navigator wheels protrude longer on the top, navigating through menus and options might be easier.

Adding touch screen and touch driven menu on this baby would make it an awesome upgrade. I feel the menu navigating through two wheels are a bit clumsy, but I can’t think of how to make it better yet. The buttons on top really needs two hand to operate this unit. With the DSO Nano (I have the first version), the navigating is done by the arrow keys on the right side of the screen and on the same face as the screen so one could be using one hand (right handed) to changes settings, or scroll the Ypos to observe the signal while the screen is not blocked by your hand or fingers.

Taking the cover apart shows a beautiful LCD inside. It makes me thinking about just remove the case and heat shrink the circuit board and keep it that way. The circuit board build looks high quality with a lot of components. The unit also is heavier than it looks.

Now I just have to figure out if the LT4504 charger in the unit is dead or if something else causes my unit charging problem (after the reversed battery is plugged in).

Just field tested my Quad on some solenoids and logic in a machine at work… way cool! Nice job! better than expected! Maybe my sights are set a little low as well, but I’m happy.

I’m waiting for a X10 probe and adaptor to arrive before trying to calibrate as I noticed that there are seperate compensations for other probes. Looking forward to seeing what you young wiz-kids come up with as far as programming goes. Thanks all!

As an old field tech I’ve found this thing is perfect for, “the right equipment is what you have with you!” The old part my title also likes, “lighter is better.” I’ve found that I can fix 99% of what I come across with the tools in my pockets and in one hand. Case in point, my new test kit below… 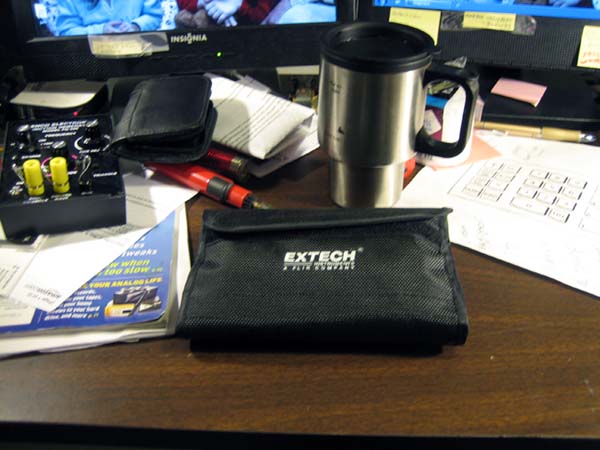 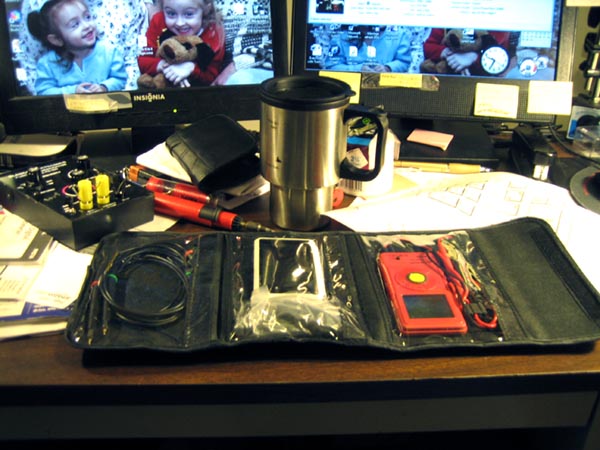 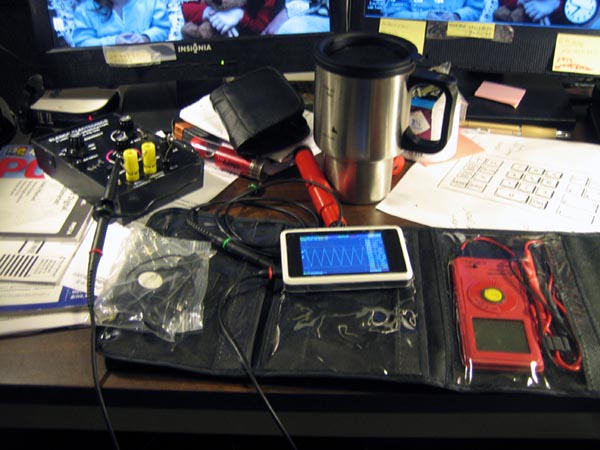