DSO NANO - how we users can impact next hardware design !!!

It looks like Seeed has just posted a new version of the nano. Can someone do a full teardown and let us know how the circuitry has changed? 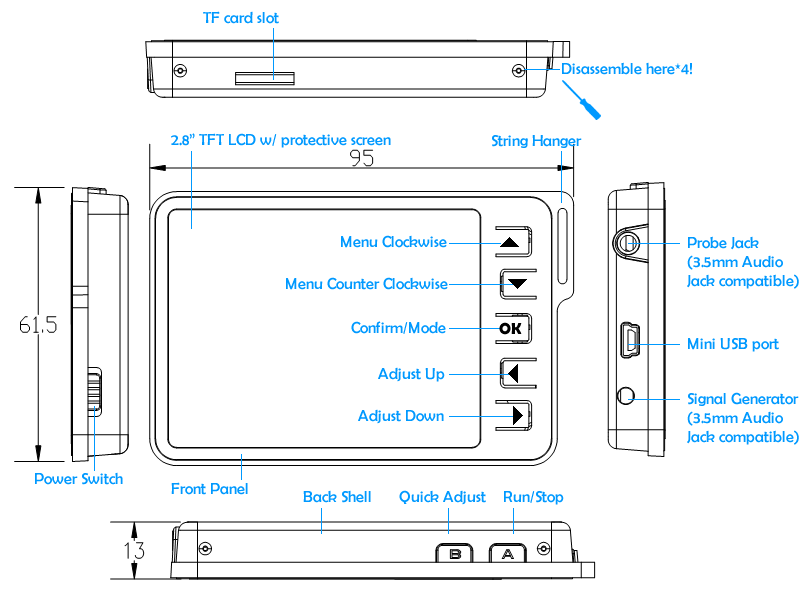 In particular, I’m curious because they note that the firmware is “mostly compatible” – what the heck?

I just heard about this a week ago. The web site Depot has most of the details that I know of. If you want a wild guess, I think the signal output may be more capable and flexible. I was mostly concentraing on the hardware. It is a new PCB, but I expect mostly the same parts and circuitry. We’ll just have to wait and see!

Looks like they’ve posted a new schematic (or at least the v2.3) on Google code. It uses LTC4054 and FDFMA2P853 for charge controlling.

Changes in the DSO Nano 2.3

Physical
The 2.3 has a metal case, and is about 20% thicker and “taller”, but 20% “narrower” than the original. The power switch is now a metalized knob on the lower right side of the case; there are 5 navigation buttons arranged vertically on front to the right of the color LCD display, and two buttons on the top right side. The input connector is on the upper left side and there is now a connector on the bottom left side for the test signal out put. A mini USB connector is on the left side between these two. The micro SD slot is on the bottom.

The DSO Nano is now strong and stiff, significantly more rugged than the original. The power switch is easier to operate. The navigation buttons are part of the front panel, instead of separate buttons. I find them easier to use than the previous version which had them in a square pattern. Neither version is particularly dust or moisture proof, so if the scope is used in a dirty or wet environment, I would put it in a clear plastic zip bag.

Circuits
The differences in the circuits are mostly to the power supplies, with some improvements to other circuits.

There is now a regulated battery charger (U1), and switching between battery and USB power (U10). This will give the battery a long life and will not overcharge it. It also allows using the DSO Nano on the USB power while charging the battery. The charge current is limited to 300ma. This means that a discharged 500mah battery should recharge from the USB port in less than 2 hours.

For the +/- 5 V supply there are two new ICs (U7, U8) replacing the old (U7). These are switched capacitor supplies which actually double the input voltage (from the Battery or USB), so the voltage can actually be higher than the “5V” on the schematic.

The calibration signal output and the serial port (CN5, internal) use a new IC (U9) as a buffer. This is operating from the Battery or USB Voltage, so the test signal’s amplitude will be higher when using the USB for power (close to 5V P-P) and lower when using battery power (3.7V P-P). This applies to the serial TX output as well.

The Attenuator section (input gain) has some variable capacitors added to allow more accurate adjustment of compensation for stray capacitance and tolerances (i.e. when looking at a square wave the tops can be made flat).

In addition to the JTAG connection (CN7 internal), there is now an ISP (In-circuit Serial Programming) connector (CN4 internal). This can make reprogramming the Processor much easier.

Everything is now on one PCB (the original DSO Nano had 2 PCBs joined by a connector).

Firmware
I don’t know the details of what changed in the code, but can tell you that it now obviously can support ISP (I don’t know if has been implemented).

Most exciting is a much better display of changing signals such as audio. The waveform display is now light blue; instead of the green of the previous DSO Nano There is also a new function: Fit, in the upper left window of the menu where you select the sweep types.

What is the “Fit” Function? Automatic Settings! When Fit is selected, both the input sensitivity (V/Div) and the sweep (us&ms / Div) automatically adjust to “fit” the signal on the screen. You can manually adjust these settings, but after a short time the “Fit” will readjust them again. This works well, with a good tradeoff in timing between changing the settings to how fast and long the signal is not optimally sized. There is enough time for some peaks without constantly switching between settings.

I will be doing some more testing and evaluation shortly and post my findings here.

What is the manufacturer of the old enclosure? I broke the enclosure of my DSO Nano and I think I need a new one.

You can visit the seeedstudio.com/depot/contact_us.html and contact with Tech. Support.

How large can the capture files be? What format are they in?

Has anyone modified the firmware to spit out the samples to something like the Sump Pump?

How can we access the hardware design files for the DSO Nano Quad?

In order to help in this area its great to have access to the hardware design files,
don’t you think?

My DSO Nano v2 got a short circuit in the probe. It almost ruined the circuit I tested. I found that the 3.5mm probe connector inside the unit was flawed, so I desoldered it and replaced it with two wires and an external connector. In the process the battery also short circuited a couple of times because it was poorly soldered. Then when everything was working I had a really hard time getting the cover back on because it was so tight (not because of my modifications).

For the next version I recommend the following:
-more reliable probe connectors
-better soldering/solder layout of the battery
-larger screws for the cover and PCB

imho, design must have resistor in serial among U9 chip pin Y3 and output jack CN3, else it is easy to overload Y3, to limit output current according to max current ratings of the chip. resistor about 100-150 omhs.
anyway i m advising to do this mod to current users.

I saw the DSO demonstration in my arduino course. It’s very usefull to work. the DSO is pratical and good to work fine to automation projects.