Sometimes I miss the equivalent of a bird’s-eye view of the full waveform and other times zooming in on a particular detail of interest is desired. To accommodate this I’ve updated the firmware to support a zoom in/out capability for captured waveforms. There is also a new vertical scrolling capability that will allow us to bring (and keep) waveform peeks within the confines of the display area.

When using these new features we’re more likely to push the Nano towards its min/max voltage limits. To help with this I’ve added a voltage out of range indicator. That is the V/Div information field will display in red when an under/over voltage condition is detected.

The user guide has been updated with details on how to use the new features as well as a new section on voltage range and sensitivity.

The full list of changes can be seen in the enclosed revisions file.

Excellent, now has a battery indicator… Thanks Ben

Really like the red excessive input color change of the V/Div value. I also appreciate the improved description about XML writes. Resize & Zoom is an excellent addition to the Nano that will greatly improve wave form analysis convenience.

Thanks for all of your effort.

I tested connecting the probe to the signal generator, but the waveform and the values of vrms, puls, vpp, Vmin, vmax, vavg not compatible with this picture 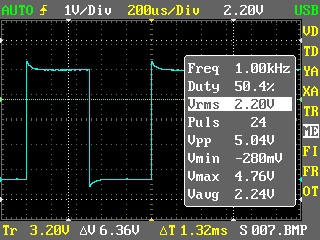 This is the image of my test 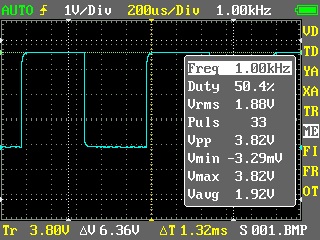 Why is there this difference between values and wave?
Help me
Thanks

Why is there this difference between values and wave?
Help me
Thanks

Thanks a lot BenF, great improvement. now I’ll be able to catch those hard to find glitches.

Ben, thanks a million for the upgrade, but is there something funky going on with the ground position?

A signal that I measured before as having no DC component now has a significant offset.

(and downgrading returns the signal to the expected state).

Maybe I just need to recalibrate?

Thanks a lot for all the good feedback!

I tested connecting the probe to the signal generator, but the waveform and the values of vrms, puls, vpp, Vmin, vmax, vavg not compatible with this picture

The square wave high level will track your battery voltage (4.3V when charging through USB) and so (as reini1305 pointed out) all voltage related measurements will be subject to battery state. The difference in Puls count (higher for V3.4 and upwards) is due to an increase in sampling buffer size between firmware versions.

A signal that I measured before as having no DC component now has a significant offset.

Can you post a screen capture with overlaid measurements of the two conflicting observations so we can see what this is about?

I re-upgraded and could not reproduce the issue. We’ll have to put this one down to an upgrade glitch.

I’ll keep an eye out for it happening again.

Thanks again for another very useful upgrade.

I have downloaded the firmware and I can only now get to the splash screen and at the bottom it says “No App found”. Any suggestions on how to either go back to original or finish off the upgrade? I hope it is not toast now.
thanks
moss

I have downloaded the firmware and I can only now get to the splash screen and at the bottom it says “No App found”.

This suggests that only one of two required files have been loaded (APP file is not installed on your Nano). You need to load both (LIB and APP) “.dfu” files included in the download. The firmware upgrade procedure is documented in the manual that came with your DSO Nano and there is also a chapter on Installation in the BenF firmware user’s guide with some additional information.

Benf , do you think its possible to outbut an image of the whole buffer?

Benf , do you think its possible to outbut an image of the whole buffer?

You can do this today if you save the buffer to an XML file, graph the data in Excel (point and click is all it takes) and then save the graph as an image.

With v3.51 (very happy with these improvements), the increased range precision, auto Gnd Pos, and associated calibration function changes are very beneficial to us all.

This change would eliminate the minor distracting Vavg display updates phenomenon that provides no valid information.

Perhaps this change could be incorporated with respect to the previous measurement value (instead of just zero) which would prevent the random +/- 1 changes phenomenon for any measurement result.

Let’s say we want to measure real small voltages, such as ripple from a DC power supply. In this case the increased precision will allow us to do so for the smallest possible variation detectable by the Nano hardware (without fluctuations as the data will be static). Also when you measure anything with a defined input level (as is likely to be the case for real measurements), data will be much more stable. Likewise when we average (as for Vavg) we will also smooth out single bit variations. For higher voltage levels, the displayed numeric measurement will be more reasonable as insignificant digits are dropped.

I would say that increased precision demands more from the user. Let’s say we measure ground level at 1V/Div and observe Vmin/Vmax fluctuations in the uV range. From other posts we’ve seen that some users interpret this as inaccuracy and something that should be fixed. Still this is reality, as close to nothing is absolutely flat or square in real life if we look close enough. Rather than trying to make the world flat or square we should embrace the ability to measure and see reality. In this particular case however we might conclude that the numeric readings are of limited/no value and perhaps resort to the waveform itself as a better indicator of ground stability.

My thinking is that as a user we should have the ability to see as much precision as is possible within hardware limitations and then rather use our judgment to make sense of the values. Still I think your point is valid, but perhaps we should give it some time and see also what other users think.

Rather than trying to make the world flat or square we should embrace the ability to measure and see reality. In this particular case however we might conclude that the numeric readings are of limited/no value and perhaps resort to the waveform itself as a better indicator of ground stability.

Observation of the waveform changes at these small increments would be much less accurate than using the Vavg measured results.

After reading your response, I realized that I ended up talking about two separate things in the same post. My original observation that the Gnd Pos measured Vavg was jumping at ADC min resolution values, was one topic and in this case the least significant ADC bit was causing the effect.

Then I changed to the topic of measurement value least significant digits, without declaring that change. The random change of +/- 1 for the least significant display digit invalidates that highest resolution digit by a factor of +/- 1 for each measurement, as we both seem to agree. My intended point was to just eliminate this random +/- 1 digit change such that real changes of +/- 2 or more could be more readily noticed while using those measurements.

I guess the other side of the coin would be that you would never see a valid +/- 1 change, but in reality you also couldn’t see that one change in the current method either because of the +/- 1 random changes that would be changing the real one change. OK, this is getting too strange.

I have nothing further to add, so I will just wait and see as you suggested.

The V3.52 update implements a new gain calibration procedure. Rather then calibrating all 18 V/Div’s separately, it is now sufficient to calibrate a total of 6 V/Div’s (one for each hardware input range). With this approach we should be able to calibrate the Nano’s to within the accuracy that can be expected from such a device. Old calibration data will be ignored when upgrading to V3.52.

The uV/mV fluctuations that came with increased precision got to me in the end and I’ve modified the firmware to display measurements using a more reasonable scale subject to choice of V/Div. Underlying arithmetic precision remains the same.

Thanks BenF for all of your good work. These improvements really round out the product. That resizing, zooming, and panning capability would really work well with the reloading of previously saved XML files.

I really like the way you have improved all the digital readouts, and the centered Gnd Pos at power-on is another impressive thought on your part.