In my continuing saga with the Quad, I originally purchased the NEWEST VERSION on amazon, which was the 2.72 version. I thought it would be the 2M disk based on the amazon description, but it was not. As can be seen in other threads I tried to work with this and update the community software - which worked. unfortunately while using it, it failed. It was a low voltage and the software seemed to be working, so I think it was just an early hardware failure (I had only had it 2 weeks). I returned it as defective. To try and not suffer all the 2.72 issues I ordered the older version on Amazon (which is $10 less).

Well, this one is also 2.72 with the 8M disk. The only difference is that it has a plastic case instead of aluminum. So it is the latest board (which I didn’t really want) with the a plastic case. Now, I really would not mind this, except…

This one seems to have a more noise on the line. Even when grounded and in all ranges. There seems to always be a ± 1 pixel “jitter”. I don’t remember the other unit having this. It happens with all the firmware I have tried. So, I am wondering if it is the plastic case? Is this normal? Did I just not notice previously? Is it a hardware problem? Do others see this kind of jitter? 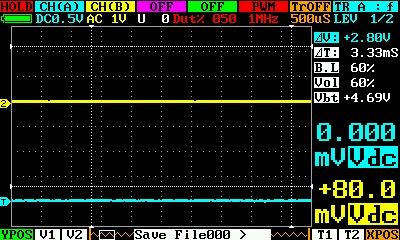 I don’t think that amount of jitter is that unusual. I have the metal case version and get about 1 bit jitter. This doesn’t really vary much based on range sensitivity. One can check the amount of jitter better by looking at a data capture like csv rather than the display.

That is almost inevitable given the 8 bit conversion comparabe to display resolution. It doesn’t bother me too much as it doesn’t materially affect the utility. Where it becomes significant is when the signal is only a small excursion on the display. When I want to do monitoring of low level ‘audio’ type signals then I use an external preamp so that signal is a decent amplitude on the display. It might be possible on slower time bases to do some averaging at the expense of depth of the capture buffer but I haven’t sseriously explored that.

I personally prefer the feel of the metal case but the plastic one does have the merits of better isolation if one is tempted to monitor higher voltages and the earth is floating.

Thanks Bobtidy, perhaps I just didn’t notice before - my impression was of more stability. I agree about the feel of the aluminum case, but I don’t think I want to fuss with this any more as long as it works. Also, I do have cases of using it with line voltage. I don’t know if this one has the 40v limit and am not sure how to tell. The manufacturer and retailers could really be a bit more forthcoming about the specs of these various versions. It does not have the warning on the back about 40v like the other did.

And, thanks for all your help getting the software working!

Originally the analogue inputs were rated to 80V direct input and that was for hw 2.6 and 2.70. They then reduced the rating of the metal case units to 40V. This was not to do with any real change of susceptibility of the input stages but more from the risk of probing circuits where there was not a good ground reference and therefore the case of the metal unit could be at a raised potential. 80V is not regarded as a safe voltage to expose people to. If the earth of the probe is known to be at true ground then there is no real difference.

The 2.72 hardware changed the input protection circuitry, and, in my view, in a retrograde way. Supposedly, to meet CE requirements all the external terminals are protected by new diodes which limit the input to around 25V. Unfortunately, if this is exceeded the diodes themselves are directly at risk of being destroyed as there is no internal resistor to protect them. If a 10x probe is used then the obviously this limit is 250V and the series resistor in the probe will protect the diode, but there could be some clipping of the input caused by the diodes if the input goes above 250V. Some users destroyed their diodes by following the calibration procedure on this 2.72 hardware. See http://www.seeedstudio.com/forum/viewtopic.php?f=26&t=4922. There was some chatter that the manufacturer was going to remove these on the analogue inputs but I don’t know whether that has happened or is going to happen. When one looks at the schematic there are large series resistors (800K) on the analogue path and 100V capacitors so these diodes are doing very little extra to protect the circuitry against large voltages.

So I guess the bottom line is that from an electrical point of view 2.72 with these diodes is still OK for 110V AC with 10x probes but will be problematic with 240V AC unless a larger divider is used. One should be taking extra good care when monitoring these voltages anyway.

Finally, thanks to you for getting the 8MB changes going. I just rolled the equivalents in.