Hi, I am very new to Arduino. Recently, I am trying to use Arduino UNO(328) to control a 8X8 LED matrix driven by Rainbowduino(328).

When I uploaded both firmwares for the Aduino UNO and Rainbowduino and connected them using I2C, there was nothing happen. The matrix was still the same pattern.

Does anyone have an idea? 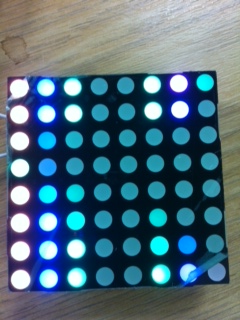 The Rainbowduino needs more supply voltage to get all the LEDs working, at least 6.5V in the external power socket.

The Rainbowduino firmware by default displays a static startup pattern, you need to feed it commands via I2C or custom firmware to make it do something else.

i have also just gotten my hands on a Arduino uno and tried uploading firmware onto the raindbowduino board, it always fails the upload though