Interesting advice. I would do it if it was easy. I have not took the main board out yet to look at the Output connector so not sure how easy it is.
I also read another safety feature to add is a Diode to protect against grounding the Output. Few burned out their 74HC125 by connecting Fout to Input ground.
that’s what i said. they have overloaded output, and because output current is limited, it can be damaged.
Diode can’t help you. Resistor! only resistor.

you must find datasheet of this particular 74HC125, and search there - max rated output current. seems it is 30 ma. then R(omhs)=Uoutput(volts)/Imax_rated(ampiers). and solder it in serial.
regards.

Finally I changed my Nano for a new, and I received it today. I turned it on and it worked but the battery was almost dead. I logged into my USB port to recharge the battery. After a while, I disconnected the Nano’s USB, I turn on the Nano and all what I had on the screen, it was a bright white, nothing else. I managed to get the firmware update 3.64 and now it function, but for how long …

To be honest, I wanted my money back because you after reading the posts on the forum member who have received their Nano and that did not work well when I had lost confidence. After two weeks my first Nano was already defective. Now, how long you run it my new? The idea of ​​the Nano V2 is not bad but I believe he needs a good development before being launched on the market.

As you can see from the pictures, the square wave generator is not perfect on the new Nano.

Thank you to all who have helped me. 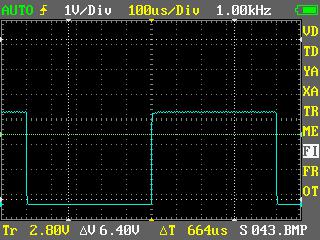 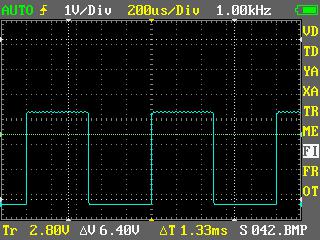 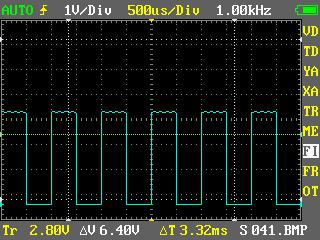