When installing v 2.7.2 of “Seeed Xiao RP2040” into Boards Manager I am receiving the following error…
“CRC doesn’t match, file is corrupted. It may be a temporary problem, please retry later.”

Version 2.7.2 only fixes the compatibility problem between XIAO RP2040 and XIAO expansion board, it is still in testing stage, we suggest you use version 1.12.0 first.

The problem has been fixed and is working properly.

Huzzah!
I can confirm that OLED on the XIAO expansion board works with an XIAO RP2040 using version 2.7.2 of the board package.

Also tested u8x8 from the u8g2 library and the real eye-catcher from the Adafruit_SSD1306 library.

Unlike previous versions of the XIAO RP2040 board package, these all work with no changes to any Seeed files or any of the libraries that I tested.

Bottom line:
Huzzah! (But I said that already).

Yes, this version of the update is mainly on top of the compatibility issues with the expansion board, we will continue to follow up.

Although I verified that changes make an I2C interface work as expected, that’s not the end of things.

I now discover that the SPI stuff is totally borked.

Now, GPIO pins 16-19 aren’t brought out to the XIAO header, so this could never work. The SS can be reassigned by the user when invoking SD.begin(), but the other stuff is fixed in the SPI interface software.

I modified the arduino_pins.h and I modified my SD test program from a previous thread so that I could test a microSD card plugged into my XIAO Expansion Board, which uses PIN_D2 as the Chip Select for the SD Card.

Comments from the attached example:

Bottom line: I guess that, when the Seeed guys copied the mbed Raspberry pi pico file to the XIAO rp2040 pins_arduino.h, they forgot to check the SPI pins.

I attached my SD test sketch in case anyone is interested. This is the same as the sketch that tested the XIAO, with the only significant change that uses PIN_D2 as the chip select. The output from this one looks like the one in the other thread.

Writing to sd card on XAIO expansion board Products & Technology

davekw7x Thank you for the quick reply. Initially, my sketch wasn’t doing the self-check, by adding “Sd2Card card” it at least performs the self-check and finds the sd card. Still not writing to sd card though. I have used multiple XIAO, XIAO expansion boards, and sd cards to no avail. I’ve attached my code for your review; I’m still fairly new to this so hopefully I have made an obvious (to you) mistake. BTW: I should mention that in spite of my love for this little controller, I find it some…

Sorry, I’m not a XIAO developer, but I’m interested in your feedback. Something I don’t quite understand, is the reason you changed the pins here that XIAO can’t use the SD card on top of the expansion board? Or is it for some reason?

I tried to explain, but maybe something got lost in the verbiage, so here goes again:

The SPI pin assignments in release 2.7.2 are for CPU GPIO pins that are not brought out to the XIAO RP2040 header.

These assignments are used in the SPI software for this board, and can not be changed in a user sketch. Therefore, the SPI library can not work with this board package, no matter what connections you make to the XIAO RP2040. Period. Full Stop.

I made assignments consistent with the XIAO RP2040 pinout diagram, which I attached to my previous post, and then the SPI stuff worked.

My development is usually on solderless breadboards or other (custom) prototype hardware, but I tested this on the XIAO Expansion board so that the good folks at Seeed could easily reproduce the problem and my proposed solution. (See Footnote)

I have attached two screen shots: The first is with the unmodified 2.7.2 Board package. The second is a run after modifications that I showed in my previous post.

The runs were with an XIAO RP2040 and with a freshly formatted 16 GByte uSD card plugged into the XIAO Expansion Board.

I have also attached the sketch that created these outputs. It is a modified version of the CardInfo example from the SD library. (Only modifications other than chipSelect value are printouts of SPI pin values.)

Footnote:
The “interesting” thing for me is that Board release 1.12.0 had correct SPI assignments, but the I2C stuff didn’t work. Release 2.7.2 has corrected the I2C stuff (not just arduino_pins.h, but other I2C stuff as well), but somehow managed to screw up the SPI.
[/Begin Rhetorical Question]
Isn’t there some kind of regression testing? Or at least some kind of review by someone other than the developer making changes?
[/End Rhetorical Question]
Oh, well… 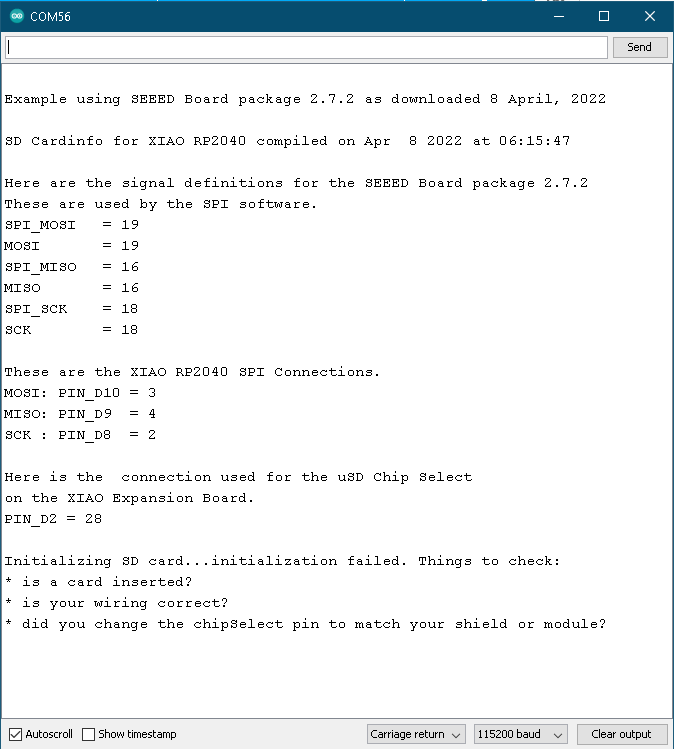 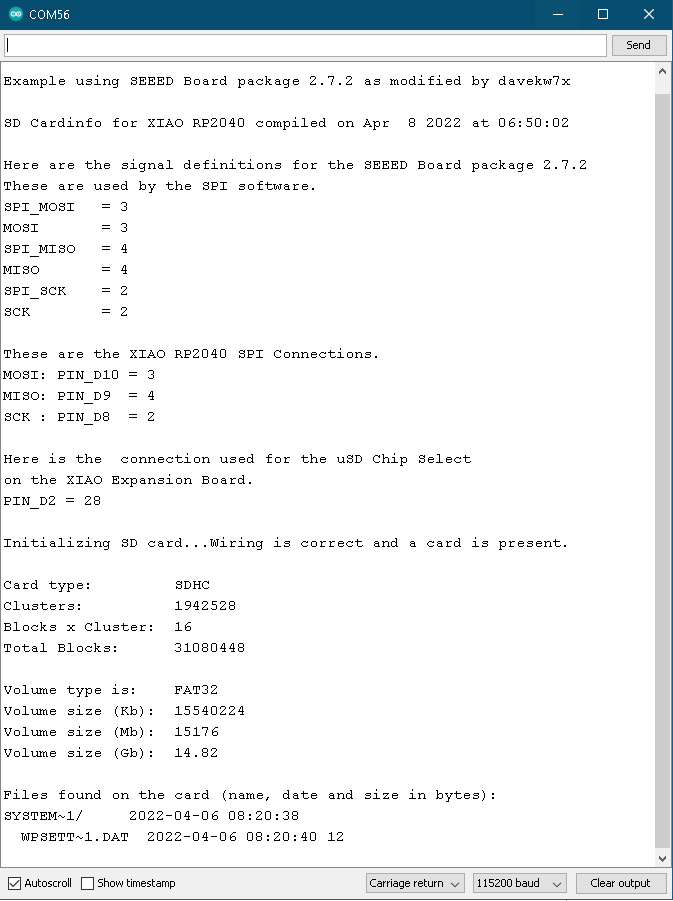 Thanks for everything, I’ll take the time to test it out.